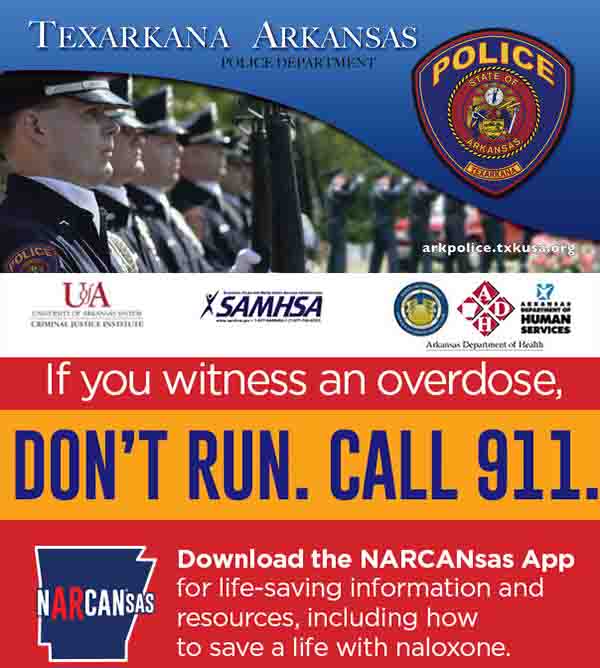 A 2-year-old boy’s life was saved by the quick actions of Texarkana police officers Sunday night. Texarkana Interim Police Chief Kristi Bennett credits the continued training of officers and naloxone kits, both of which were provided by the Criminal Justice Institute, Blue and You Foundation, and the Office of Arkansas Drug Director.

“This incident reveals the importance of officers having the training and resources available to them during these types of situations,” Bennett said. “Officer (Marcos) Luna’s quick thinking and assessment of the situation, along with his training ultimately saved this child’s life. I could not be more proud of Officer Luna and the job he did!”

Just before 10 p.m. Sunday, February 14, 2021, emergency responders were called to an apartment complex on Links Drive. Upon arrival, a 2-year-old boy was found on a couch losing conscience. The mother told officers that she had placed a 10mg Percocet on the counter, but did not see the child take it. She reported seeing the boy “chewing on something white and foamed around his mouth” and called 911 after noticing the boy lose consciousness. The report said she later found a partially consumed pill.

While emergency personnel provided stimuli to the child, Officer Luna grabbed a Naloxone kit and administered one dosage in the child’s right nostril. A few seconds later, the child regained consciousness.

“He proceeded to sit up and act cranky, but otherwise normal,” Officer Luna reported.

The child was later transferred to Wadley Regional Medical Center for further evaluation.

“I am so proud of the heroes from the Texarkana Police Department,” said Arkansas Drug Director Kirk Lane. “This incident not only demonstrates the importance of being equipped with Naloxone, but also of our Drug Take Back program that educates Arkansans to monitor, secure, and safely dispose of their medications.”

Naloxone, an opioid antagonist, is a medication used to reverse the effects of an opioid-induced overdose. Though it should be used in an emergency situation (a suspected opioid overdose), Naloxone has no effect on non-opioid overdoses. Naloxone is available for purchase at some pharmacies throughout Arkansas. Prescription medicines pose a danger to people, pets, and the environment if the medications are not disposed of properly. The Office of the Arkansas Drug Director works closely with the DEA in the coordination of this growing coalition, and in maintaining the Artakeback.org website.

One key to its success is the ability to have permanent collection boxes located at key locations throughout Arkansas communities. This allows the public to dispose of their unwanted medications throughout the year. Currently, Arkansas has more than 250 permanent collection boxes, with at least one in every county in Arkansas. The state ranks second in the nation for over-prescribing opioid medications at 114.6 opioid prescriptions per 100 people (the national average is 66.5 prescriptions per 100 people). There’s more prescriptions in Arkansas than people.

Arkansans can visit artakeback.org/take-back/collection-sites to find Drug Take Back locations throughout the state.