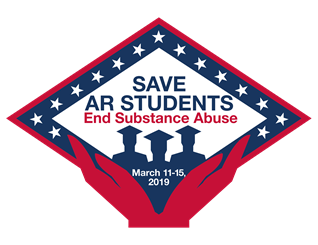 For the first time ever, college and university students across the state of Arkansas are joining forces to combat substance abuse. The inaugural “Save AR Students” substance abuse awareness week will be held from March 11-15, 2019. A news conference will be held on the steps of the Arkansas State Capitol in Little Rock at 9 a.m. Monday, March 11.

The event was organized by student government association members from the University of Arkansas and 18 other state colleges and universities. Speakers at the news conference include Gov. Asa Hutchinson, Arkansas Drug Director Kirk Lane, Christopher Dickie, Kimberly Ashley-Pauley and Trevor Villines. In the event of inclement weather, the kickoff will be held at the Association of Arkansas Counties at 1415 W. 3rd St., Little Rock.

“It’s no secret that substance use is drastically affecting the state of Arkansas. It’s concerning that statistics have us towards the top for opioid prescriptions here in our state. It is very concerning seeing this issue affect our college campuses,” said Trevor Villines, a University of Arkansas, Fayetteville student who serves as Save AR Students 2019 Event Director.

According to the Centers for Disease Control, in 2017 Arkansas had the second-highest opioid prescription rate in the country – with more prescriptions written than the actual population of the state. According to the Substance Abuse and Mental Health Administration, people ages 18-25 have the highest risk for illicit drug use at a rate of 22.7 percent. 9.9% of college students abuse Adderall, compared to 6.2% of non-college adults according to drugabuse.org. Adderall, frequently prescribed to treat Attention Deficit-Hyperactivity Disorder (ADHD), has stimulant effects and can be physically and psychologically addictive when misused.

The initiative received support from prevention programs of Arkansas Department of Human Services/Division of Aging, Adult, and Behavioral Health Services and the Arkansas Drug Director’s Office. The Substance Abuse and Mental Health Administration of the U.S. Department of Health and Human Services has awarded several federal grants to the prevention unit, providing resources for this and other projects.

Each campus will determine its own schedule and activities.

The University of Arkansas Fayetteville Associated Student Government is joining with Pat Walker and several campus organizations to promote the week and raise awareness of substance abuse. Throughout the week volunteers will be tabling from 11 a.m. to 2 p.m.at the Student Union distributing information on prescription opioids, heroin, fentanyl, amphetamines, and Arkansas’s Joshua-Ashley-Pauley Act, and giving away buttons and t-shirts promoting the Save AR Students.

Other events during the week at the Fayetteville campus include:

“Substance abuse has no borders,” Villines said. “It affects people of different gender, race, and religion. If we’re going to do something about it, the time is now. We’ve got to roll up our sleeves, put politics aside, and come together as one. It’s up to us to Save AR State, Save AR Future, but more importantly, Save AR Students.”