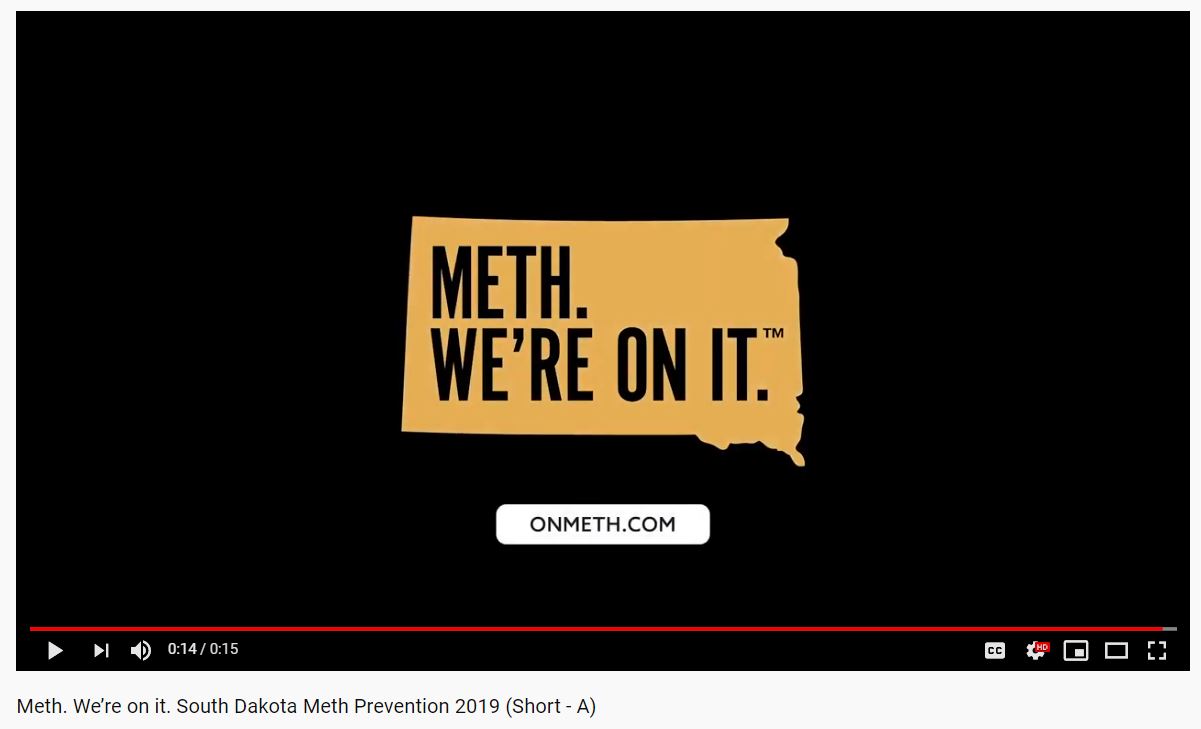 The advertisement opens with soft piano music followed by an array of South Dakotans, from an elementary school-aged girl to an elderly rancher, declaring they’re “on meth.” The camera pans across a town, an expansive prairie as the voice-over states that meth is “everyone in South Dakota’s problem. And we need everyone to get on it.”

The anti-drug campaign left many people scratching their heads.

Critics responded to the ads asking, “What were they thinking?” The campaign went viral on social media. #MethWeAreOnIt trended all day on Twitter prompting a torrent of snide comments and Breaking Bad gifs.

The fact is this cowboy is only 31, strong ad #MethWeAreOnIt

One user compared the oddly-worded message to the late 1990s anti-drug campaign involving a pencil that read: “Too cool to do drugs” and subverted its message as students sharpened it.

Does #MethWeAreOnIt remind anyone else of the “too cool to do drugs” pencil? https://boingboing.net/2014/02/25/the-story-behind-the-too-coo.html …

The story behind the “Too Cool To Do Drugs” pencil

This amusing picture, of an anti-drug propaganda pencil whose message is subverted simply by sharpening it, been doing the rounds. The truth is stranger than some of the fictions that accompany it:… boingboing.net

To South Dakota’s credit, everyone is talking about meth. For a state where the rate of methamphetamine use among 12-17-year-olds is twice the national average and where demand for meth addiction treatment has doubled in the last four years, any attention is good attention.

Amid the social media backlash, South Dakota Gov. Kristi Noem defended the campaign in a series of tweets. “Hey Twitter, the whole point of this ad campaign is to raise awareness. So I think that’s working,” the governor wrote. She followed up, “Twitter can make a joke of it, but when it comes down to it – Meth is a serious problem in SD.”

Hey Twitter, the whole point of this ad campaign is to raise awareness. So I think that’s working… #thanks #MethWeAreOnIt

The anti-meth campaign included television commercials, radio ads, billboards and a social media campaign and cost about $450,000 according to reports. The campaign is also part of the governor’s 2020 budget request for more than $1.7 million to fund meth treatment and prevention programs.

Since the early 2010s, the nation’s focus has shifted from the problems of methamphetamine abuse to opioids, arguably for a good reason. Opioid overdose deaths more than doubled between 2013 and 2018, when those drugs were involved in 47,590 deaths, more than half the total overdose deaths in the country. 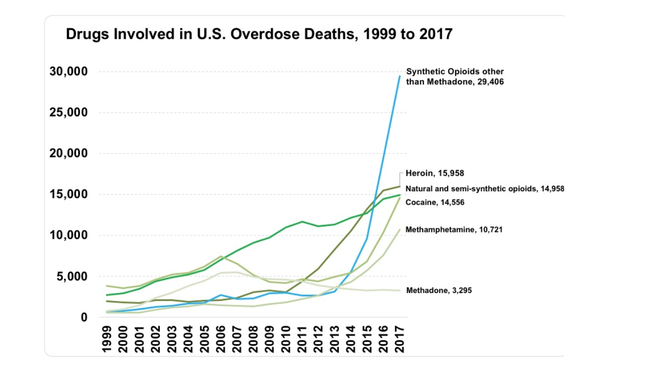 Methamphetamine overdose deaths and usage rates remained relatively stable from 2005—when meth was popularly (though falsely) considered America’s most dangerous drug—through 2013. Congress tackled the methamphetamine problem as an “epidemic” in the early 2000s. Lawmakers limited the possession, manufacture and distribution of ingredients critical in the production of crystal meth. Law enforcement cracked down on U.S. laboratories involved in cooking meth and authorities worked with Mexico to limit the export of chemicals.

It seemed that the meth problem was under control and the epidemic involving the highly addictive stimulant had subsided.

The problem never went away, however. The local manufacture of the drug decreased but traffickers in Mexico and Latin America picked up the slack and continue to do so. Between 2014 and 2019, Customs and Border Protection seizures of methamphetamine increased more than threefold. The latest data show more than 68,585 pounds of meth seized nationwide in the 2019 fiscal year. In that same period, criminal prosecutions for methamphetamine trafficking increased 20%, according to the U.S. Sentencing Commission.

Even more concerning, the meth that law enforcement officers are taking off the streets is much more potent and far less expensive than it was in previous years. The Drug Enforcement Administration reported that the price per gram of methamphetamine declined by 68% between 2008 and 2017 and the potency of the drug more than doubled from 46% purity to 93%. 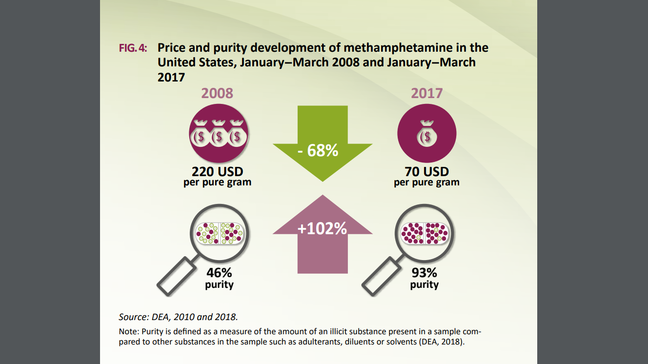 DEA statistics on potency and cost of methamphetamine in the U.S. (Image: 2019 UNODC report from Global Synthetics Monitoring: Analyses, Reporting and Trends Program)

Dr. Wilson M. Compton, the deputy director of the National Institute on Drug Abuse (NIDA) explained the increasing trend of “overlap” in the use of methamphetamine and opioids in numerous parts of the country in recent years.

“This is a stark reminder of addressing addiction overall not just any one substance,” Compton said. “It also reminds us that methamphetamine did not go away.”

Methamphetamine abuse is still endemic in many western states and appears to be growing in other parts of the country. The Centers for Disease Control and Prevention (CDC) published a report last month identifying the regions where meth is killing more people than fentanyl or heroin. The map shows the problem is most acute in Arizona, California and Nevada followed by the region encompassing Colorado, North and South Dakota, Montana, Utah and Wyoming. The crisis also extends further north to Alaska, Idaho, Oregon and Washington. 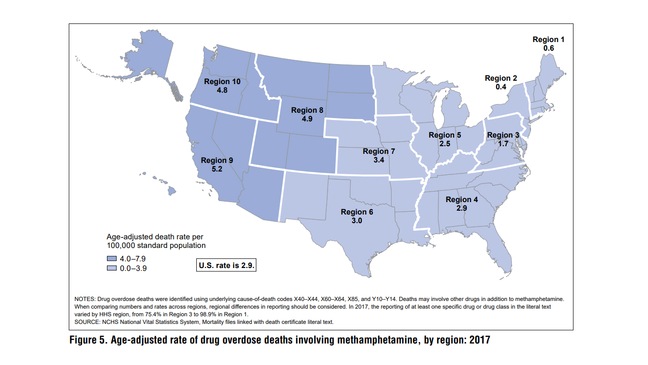 In many ways, the methamphetamine crisis is regional and the resurgence has largely affected areas that were hard hit by synthetic stimulants in the past. It also disproportionately affects rural communities that often don’t have access to addiction services, making it more challenging to treat. Moreover, unlike opioid abuse, where providers can offer medication-assisted treatment, no such treatment exists for methamphetamine abuse—though researchers continue working to develop it.

AN ADDICTION CRISIS BIGGER THAN METH OR OPIOIDS

The renewed attention on the methamphetamines amid an ongoing opioid epidemic has addiction specialists advising that it’s time to develop a more comprehensive approach to the overall problem of addiction.

“What’s important and a concern to us is not just meth alone but meth in combination with opioids creating a potentially very dangerous situation,” said Erin Artigiani, a co-investigators at the National Drug Early Warning System at the University of Maryland, which monitors emerging drug use trends.

“It’s not just one particular drug or another,” Artigiani continued. For example, NDEWS researchers identified a concerning pattern where more than half of the individuals admitted for opioid addiction treatment at two facilities in Oregon were also using methamphetamine. Another study published earlier noticed the same pattern and documented a nearly fivefold increase in the use of methamphetamine among individuals being treated for heroin addiction between 2008 and 2017.

Drug users explained various reasons for using meth alongside opioids. Some falsely believed that meth was safer than opioids, an argument that Dr. Compton compared to jumping out of the frying pan into the fire. Others saw methamphetamine as a way to counter the effects of certain drugs off opioids. Many others struggled with multiple drug addictions.

Dr. Daniel Ciccarone, a professor at the University of California San Francisco school of medicine and addiction clinician, recently argued that the focus on opioids at the expense of other drugs and especially polydrug use demonstrated a “failure of public policy.”

“This is a multi-headed monster,” Ciccarone said in an interview with Addiction Professional. “Demand for drugs is a monster, continually being fed in ways that we’re not predicting. Who predicted the resurgence of methamphetamine? No one, as far as I know. Meanwhile, the average patient has gotten much sicker while we’ve been handling the opioid crisis.”

Meanwhile, South Dakota, regardless of their specific ad campaign, raised an important alert about an ongoing problem that has continued to plague many states and communities.

Addiction experts commended South Dakota for launching an awareness campaign and taking steps to make addiction resources available for hard-to-reach rural communities. Artigiani applauded South Dakota’s efforts to develop and promote a program to address the substance abuse crisis. “I’m sure, in light of the responses they’re getting on Twitter, they may be reconsidering the particular language,” she noted. “I hope they continue their outreach efforts.”