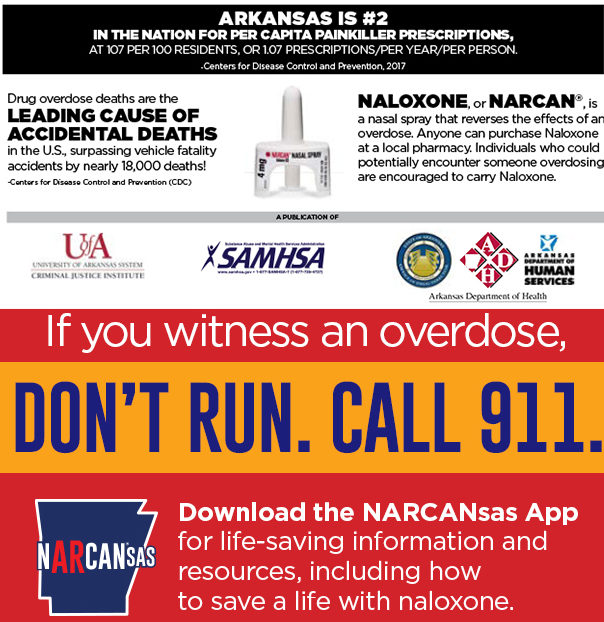 Little Rock, Ark. – The Centers for Disease Control and Prevention (CDC) released a new study on Aug. 6 about pharmacy-based naloxone dispensing, which showed the rate of naloxone prescription was far too low in relation to the number of high-dose opioid prescriptions. Naloxone is a medication that can reverse the effects of an opioid overdose and prevent overdose deaths, and it can be administered in a nasal spray called Narcan.

In Arkansas, naloxone is widely available in pharmacies. A standing prescription from Secretary of Health Dr. Nate Smith allows Arkansans to request naloxone without a direct prescription from their doctor. However, physicians are encouraged to talk with their patients who are prescribed opioids about naloxone, and patients are encouraged to talk with their physicians about naloxone if they or someone they know uses opioids.

The Arkansas Department of Health (ADH), with a grant from the Substance Abuse and Mental Health Services Administration (SAMHSA), works to train and distribute Narcan to volunteer fire departments, homeless shelters, and crisis centers in an attempt to reduce opioid overdose-related deaths.

“We’ve seen that Arkansas is particularly affected by the opioid epidemic,” Dr. Smith said. “To be able to provide essential, lifesaving equipment to those most likely to be the first responder is a great step, and we plan to continue expanding this opportunity.”

Thanks to a similar SAMHSA and Blue and You Foundation grant-funded program with the Office of the Drug Director at the Arkansas Department of Human Services and in partnership with the Criminal Justice Institute, more than 4,630 first responders, treatment center employees and school nurses in Arkansas have been trained to use Narcan, with 3,931 kits distributed to date. Each kit includes two doses of Narcan. So far, there have been 279 identified overdose reversals as a result of this program.

“Naloxone enables someone to breathe during an opioid overdose,” Arkansas Drug Director Kirk Lane said. “It also enables a person who overdoses due to a high-dose opioid prescription or substance misuse disorder to live and have the ability to seek treatment and progress toward recovery. Having the ability to administer naloxone can make the difference between life and death.”

Lane’s office also has created an app called “NARCANsas” to educate Arkansans about opioid use disorder. It includes information about treatment, prevention, and recovery resources. It walks individuals through the steps of rescuing someone who has overdosed by administering naloxone and calling 911. It gives examples of the signs of an overdose and information about drug takeback efforts. It is available on both the Apple and Google app stores and has been downloaded 819 times.