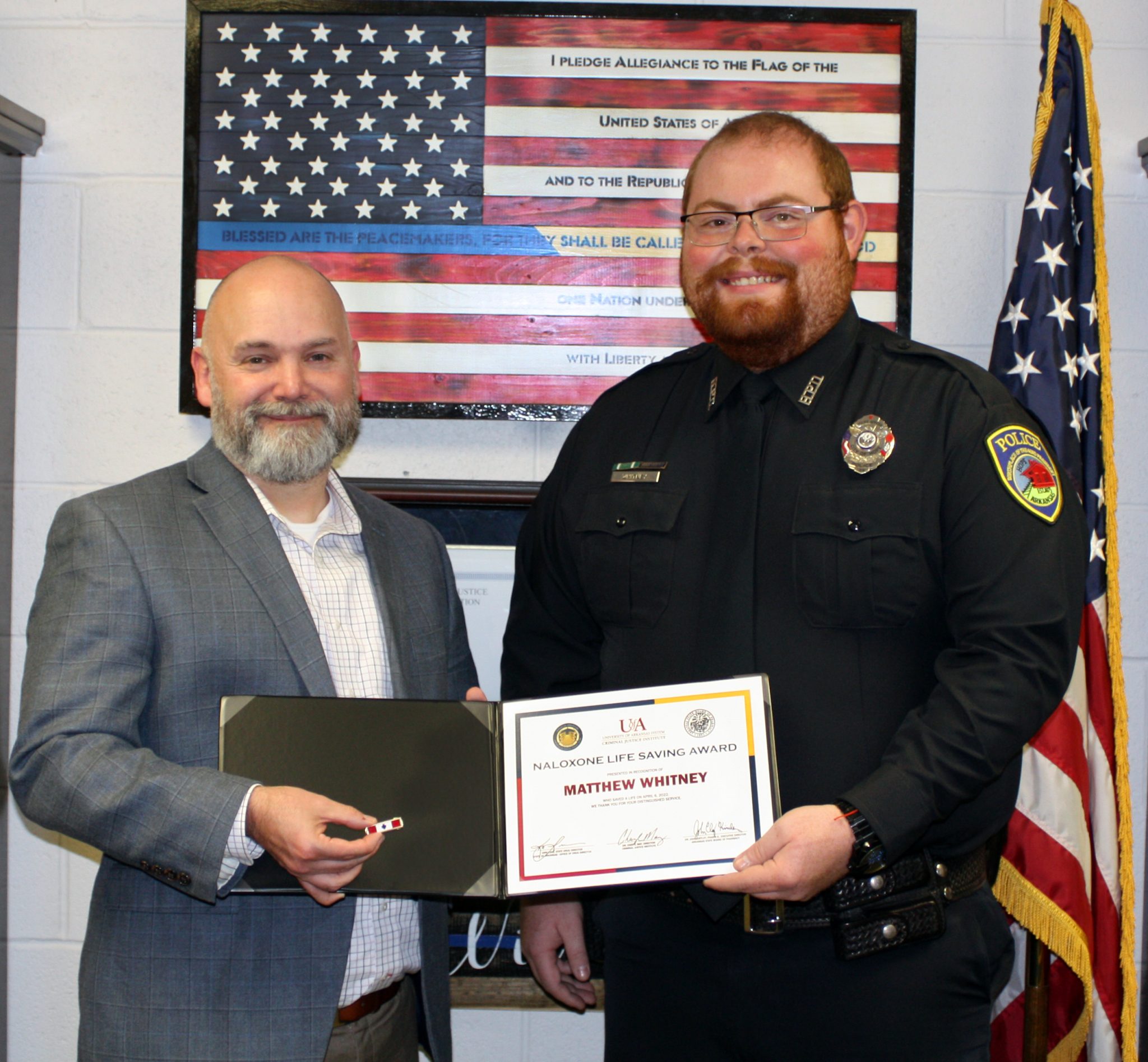 An officer who saved the life of a middle school student in Hope was recognized by Arkansas Drug Director Boyce Hamlet this week.

“Relying on instincts and proper training, a child’s life was saved by the quick actions of this law enforcement officer,” Hamlet said. “It’s not something you want to hear about, that naloxone had to be used inside a school, especially on a young student, but we are grateful officers across the state are being properly equipped and trained to handle this situation. We also commend the school nursing staff and administration for quickly contacting 911.”

Just after 11 a.m. on April 6, 2022, Hope Police Officer Matthew Whitney was alerted by dispatch that a student at Yerger Middle School had ingested an unknown drug and was unresponsive. Upon arrival, Whitney observed the student was breathing but unresponsive and attempted to wake the student with a sternum rub and verbal stimuli with no response. The officer was not able to view the student’s pupils, as they were “rolled to the back of her head” and “showing signs of a possible opioid overdose.”

Reportedly after administering naloxone (commonly referred by the brand name Narcan) nasal spray, the student became alert and able to answer questions. When the officer asked what the student ingested, she responded that it looked like “a Smartie candy but it had purple dots and some sort of circle imprinted in the center” and that she got it from another student. First responders from Pafford EMS then arrived and continued to treat the student.

The report said a teacher informed the officers that a student turned in a pill and handed the officers the pill which was wrapped in a napkin and plastic glove. A white pill with purple dots and a handicap symbol imprinted in the center was observed, the report said. A urine sample from four students tested positive for methamphetamine and two other samples were not available at the time of the completion of the police report.

The report said one person was taken into custody, taken to the Hempstead County Detention Center and charged with possession of a controlled substance (the identity was not released due to the age of the suspect).

“Nobody in communities across the state wants to think about incidents like what happened in this middle school, but we all have to be prepared for that possibility,” Hamlet said. “We are thankful to the Criminal Justice Institute in Little Rock for the partnership that allows us to provide first responders, including school nurses, across the state a multitude of naloxone kits and training. As the state drug director, our goal is to prepare all Arkansas communities and to change and save lives.”

Between October 2021 and September 2022, the Criminal Justice Institute and Arkansas Drug Director partnership has trained 2,238 first responders, treatment center staffs and citizens, and distributed 3,013 naloxone kits in the state. For more information about naloxone training, contact the Criminal Justice Institute at www.cji.edu or call 501-570-8051. Information about drug trends, narcotic arrests, overdose deaths, naloxone saves and more can be found at https://artakeback.org/the-arkansas-opioid-dashboard/ and click on the individual counties on the state map.