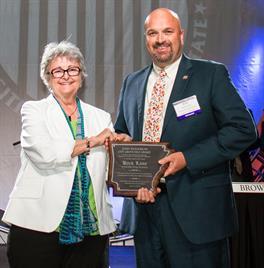 The Arkansas Municipal League at its 84th Convention, held June 13-15 in Little Rock, honored Arkansas Drug Director Kirk Lane with the John Woodruff “City Above Self” Award. The award is presented to a person who has provided lasting benefits to cities and towns of Arkansas, either collectively or individually, by being an outstanding example of dedication to their improvement.

As the state’s Drug Director, Lane stood in solidarity with the members of the Arkansas Municipal League on the steps of the State Capitol as we announced the historic opioid litigation earlier this year. The cities, counties, and the State of Arkansas are committed to fighting the opioid epidemic together.

The award is named in honor of Woodruff, the League’s communications coordinator and editor of City & Town from 1992 until his death in 2007. Before that John covered the North Little Rock beat for the Arkansas Gazette for 21 years. John worked tirelessly and unselfishly for the cities of Arkansas.

The Arkansas Municipal League is a service and advocacy organization for the municipalities of Arkansas. The League offers its programs and services to all 500 cities and towns in the state and was created in 1934 to assist cities with information and representation in the public affairs of our state and nation. To find out more, please visit www.arml.org.