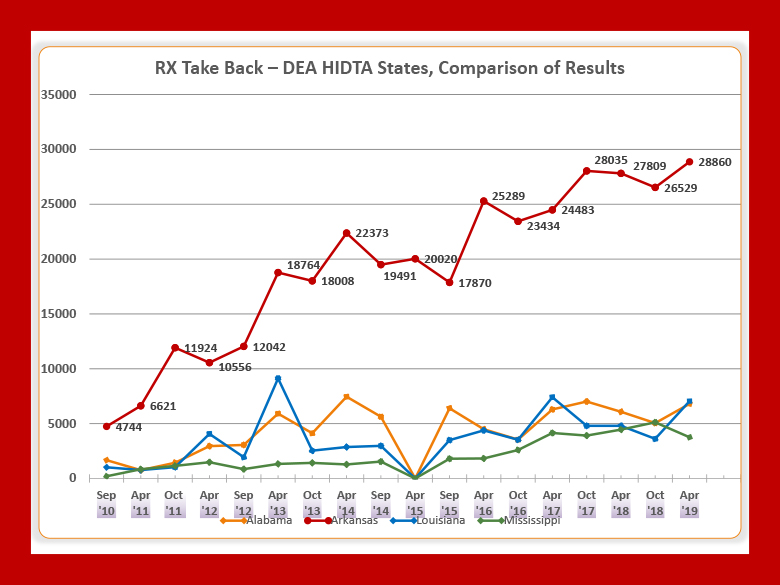 Since the summer of 2010, Arkansas has collected 173 tons of medications from Drug Take Back Day events. Although Arkansas is 33rd in population, the state ranks 3rd nationally in pounds collected per capita and 13th in total weight collected.

[DISCLAIMER: **Collectively, there have been 18 total Arkansas Drug Take Back Day events, and 17 national events. Results from the State Take Back in Spring 2015 were rolled into the total results for National Take Back 10 held September 26, 2015.]

♦ Despite being just thirty-third in population among all states, Arkansas ranks #13 in total weight1

♦ Arkansas ranked 10th in the amount of law enforcement agency participation with 184. Texas ranked 1st with 380 agencies. Washington D.C. ranked last with 1 agency. Nationally there were 5,015 agencies (average of 162 per state).2

♦ Arkansas ranked 5th in the number of collection sites with 310. Texas ranked 1st with 380 and North Dakota was last with 3.

♦ The 4-state DEA region consisting of Alabama, Arkansas, Louisiana, and Mississippi pooled a total weight of 46,459 pounds for the 17th Drug Take Back Day and 528,816 pounds for all 17 Drug Take Back Day events. Arkansas, despite being the least populated of the four: (1) Accounts for 52% of the total weight, collecting 165,310 pounds more than the other three states combined; (2) Averages more participating law enforcement agencies than the other three states combined;2 and; (3) Accounts for 63% of the region’s total sites for Take Back 17.

♦ Ranks 5th in the number of participating Law Enforcement Agencies.

♦ Ranks 5th in the number of registered collection sites.

Weight Collected Per Law Enforcement Agency (Take Back 17, only):