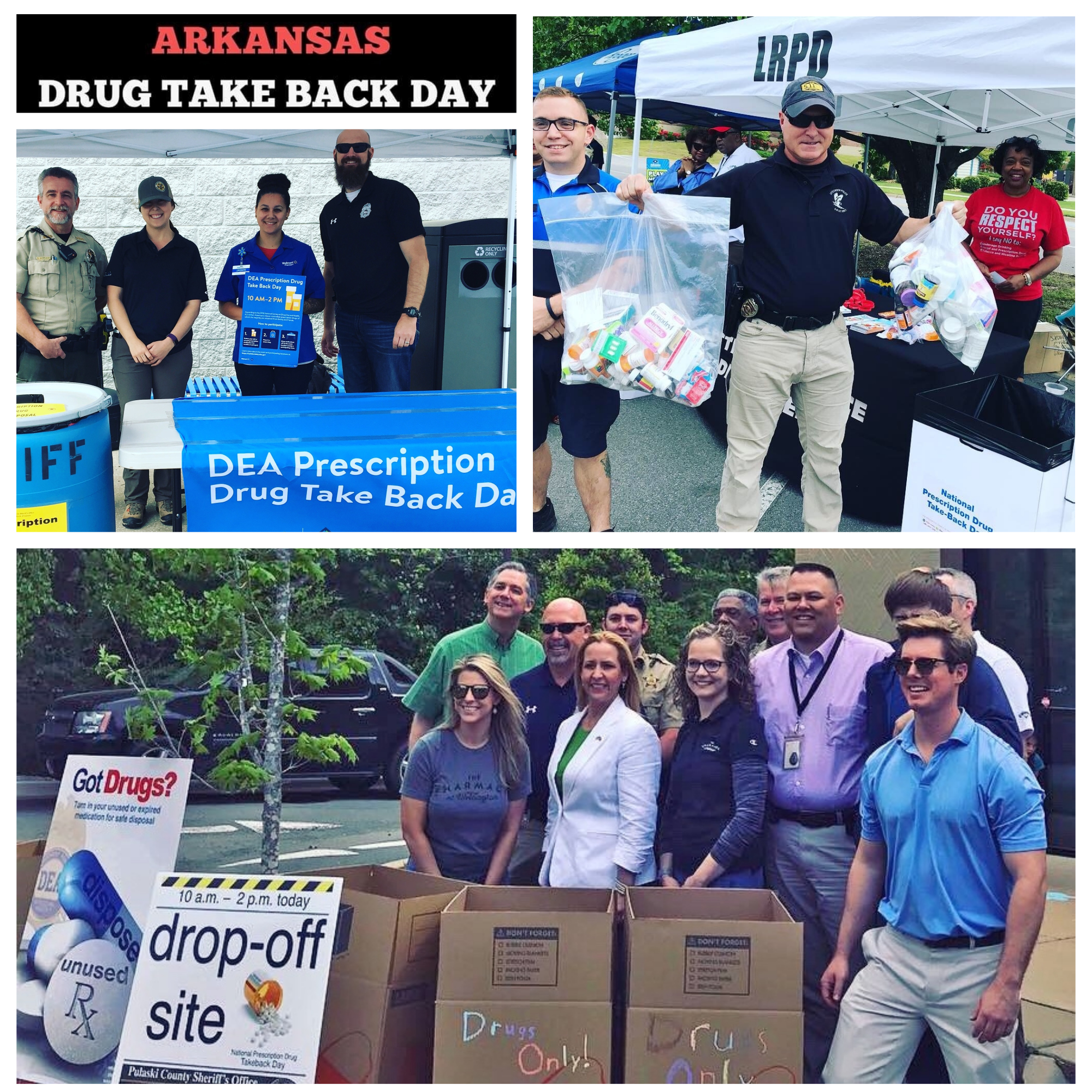 In just one day, nearly 29 thousand pounds of prescription medications were collected from more than 300 locations across Arkansas, breaking the previous Arkansas Drug Take Back Day record.

“Community, business and law enforcement partnerships continues to grow immensely in Arkansas as more people are recognizing the true value of this program,” said Arkansas Drug Director Kirk Lane. “The Arkansas Drug Take Back Day isn’t just about collecting expired or unneeded medications; it’s an expanding opportunity to educate more people about the opioid epidemic in our state. It’s our goal to save lives and mold safer communities through addiction prevention measures such as this ultra-successful program.”

The theme of the 17th Arkansas Drug Take Back (held on April 27, 2019) was “I can. You can. We can. Save a life with Narcan!” to coincide with the launch of the nARcansas app – a free resource containing tools to administer naloxone, an opioid antagonist, in the moment of an opioid overdose and continued steps to save a person’s life. Though it should be used in an emergency situation only, Naloxone has no effect on non-opioid overdoses.

Lane said the announcement of the nARcansas app launch during this Arkansas Drug Take Back Day will lead to numerous lives being saved.

“We’ve handed out thousands of Naloxone kits with training to Arkansas first responders who in turn, to date, have saved 246 lives,” Lane said. “Expanding the training to the rest of the public with just the touch of a finger on a cell phone can lead to immeasurable lives being saved in the near future. It also gives a multitude of resources including links to treatment centers, prevention information, and much more.”

The culmination of the 17th Arkansas Drug Take Back Day resulted in 28,860 pounds of medications collected.

“The DEA is pleased at the overwhelming response of the citizens of Arkansas, and we thank them for participating in this important event – making their homes and communities safe from possible prescription drug abuse or theft,” said DEA Assistant Special Agent in Charge Justin King.  “With the continued collaborative support and hard work of our state and local law enforcement and community partners, these Take-Back events have increased awareness of the opioid epidemic and offer our citizens a safe and anonymous way to dispose of unwanted and expired medications.”

All the medications collected during the 17th Arkansas Drug Take Back Day, as were previous events, were transported via the Arkansas National Guard to a facility for environmentally safe destruction.

Prescription medicines are a toxic waste & pose a danger to people, pets, & the environment if they are not disposed of properly. Medicines flushed or poured down the drain end up in the waterways, affecting our drinking water. Throwing medications in the trash, even if they are mixed with materials such as kitty litter or coffee grounds, will still make it to a landfill and seep through the soil and into groundwater. There’s also a danger of people and/or pets finding medications in the trash – The Animal Poison Control Center said 17.5% (34,888) of pet poisoning calls in 2017 were attributed to prescription medications.

In Arkansas, there were 379 drug overdose deaths in 2016, which increased to 411 drug overdose deaths in 2017. Arkansas ranks second in the nation for per capita opioid prescriptions, at 107 per 100 residents; the national average is 58.7 prescriptions per 100 persons. In nearly a decade (since 2000) deaths involving opioids has increased by 200% in the U.S.

The nARcansas app was created in a partnership with the Office of Arkansas Drug Director, Criminal Justice Institute, Division of Aging, Adult and Behavioral Health Services and Team Si. Naloxone is available for purchase by the public at some pharmacies throughout Arkansas.