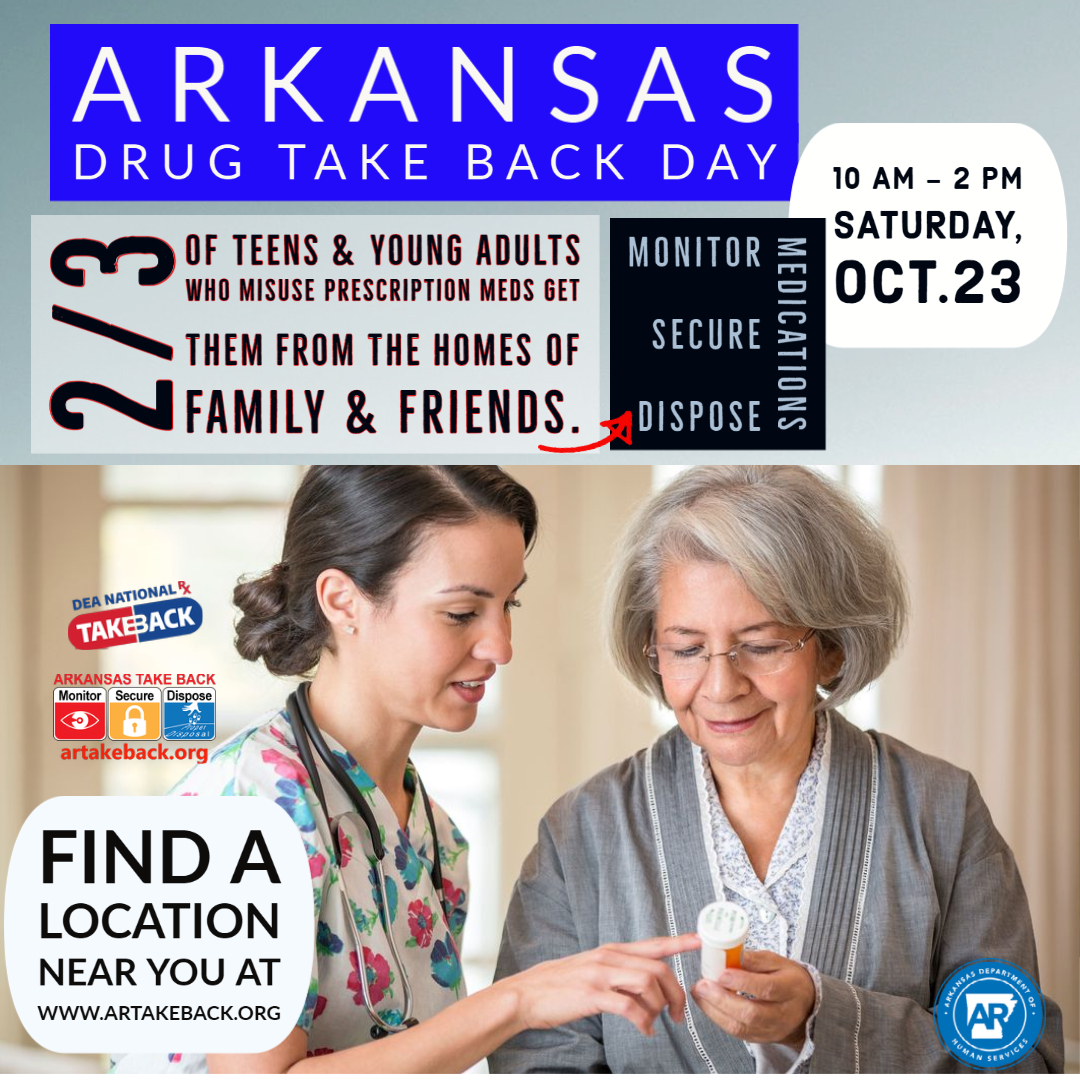 Where: At secure collection sites statewide; full list at https://artakeback.org/take-back/collection-sites/

The 22nd semi-annual Arkansas Drug Take Back Day will have nearly 300 locations across the state to encourage residents to dispose of expired and unneeded prescription medications in an environmentally safe method and it can save lives.

Provisional data from CDC’s National Center for Health Statistics indicate that there were an estimated 93,331 drug overdose deaths in the United States during 2020, an increase of 29.4% from the 72,151 deaths predicted in 2019. In Arkansas, 547 people died from a drug overdose death in 2020.

“The Arkansas Drug Take Back Program is an educational program to encourage all citizens to keep their households safe,” said Kirk Lane, Arkansas Drug Director. “The more we can get people to monitor, secure and properly dispose of the medications, the more we can save lives through less accessibility of those that can intentionally or unintentionally abuse or misuse them.”

(1) Monitor – Know where you medications are and how many/much you have at all times.
(2) Secure – Lock up your medications. Don’t let them end up in the hands of someone you love to abuse them, which could even cost them their life.
(3) Dispose – The only way to properly (environmentally safe) way to get rid of expired and unneeded medications is to take them to a drug take back box or join us on Saturday, Oct. 23 for the Arkansas Drug Take Back Day at any of the 250+ locations across the state. Locations are on our website: https://artakeback.org/take-back/collection-sites/

The theme this time is focusing on the senior population – our parents and grandparents. Did you know that nearly 1 million adults aged 65 and older live with a Substance Use Disorder (SUD)? But even those who don’t have SUD can fall victim to stolen medicine and the last thing they’d want is to find out a someone in their family used their home to get their medications for illegal use.

Also, never flush medicine and don’t throw them in the trash. Prescription medicines are a toxic waste & pose a danger to people, pets, & the environment if they are not disposed of properly. Medicines flushed or poured down the drain end up in the waterways, affecting our drinking water. A recent study shows that 80% of U.S. streams contain small amounts of human medicines. Sewage systems cannot remove these medicines from water which is released into lakes, rivers, or oceans. Fish & other aquatic animals have shown adverse effects from medicines in the water. Even very small amounts of medicine have been found in drinking water, & recent studies have shown opioids appearing in marine animals in some areas of the U.S.

The medications collected during the Arkansas Drug Take Back Day will be counted for statistical purposes and the Arkansas National Guard will later transport them to be destroyed at a facility in an environmentally safe manner.

Arkansas has remained in the top 15 in the amount of medications collected since the first DEA National Drug Take Back Day event started on Sept. 25, 2010. Though the state is 33rd in population with slightly more than 3 million people, Arkansas ranks 2nd nationally in pounds collected per capita and 9th in total weight collected. The Arkansas Department of Human Services and the Office of the State Drug Director thank all Federal, State, and local agency partners as well as the community organizations and public health providers who continually make Arkansas’s Drug Take Back Day one of the foremost prevention programs in the state.

The Office of National Drug Control Policy (ONDCP), as part of its National Drug Control Strategy, called for an increase of prescription drug return and disposal programs to curb prescription drug abuse. In early 2010, a coalition led by the State Drug Director, the Attorney General, both Arkansas Districts of the U.S. Attorney’s Office, and numerous federal, local, and state agencies, prevention professionals, and private organizations, launched an ongoing education program to encourage everyone to “Monitor, Secure, and Dispose” their prescription medications.

As part of the “Monitor, Secure, and Dispose” effort, the coalition organized Arkansas’s participation in the U.S. Drug Enforcement Administration’s National Prescription Take-Back Initiative, and take back events took place on September 25, 2010; April 30, 2011; October 29, 2011; April 28, 2012; September 29, 2012; April 27, 2013; October 26, 2013; April 26, 2014; and September 27, 2014. DEA announced the discontinuation of the national initiative in September 2014, but an Arkansas Drug Take Back Day event under the leadership of partners within the state was held on April 25, 2015. The DEA then reinstated the program nationally on September 26, 2015, and participates semi-annually since 2016 with Drug Take Back Day events held in April and October.